Live Out Loud – A thank you to Augustines

‘Live out loud and do what you gotta do, ain’t no one keeping score, this is your life’

Augustines have always had the right words at the right time. They have been my go-to band for nearly six years now. If in doubt, Augustines will sort you out. It’s a really special thing when you find a band like that. I suppose it’s also quite easy to get complacent and take it for granted. You find a band like Augustines, so vital and honest and full of life, and you see a gig and realise you are in the presence of the greatest live band of their generation, and not just that but everyone else there in that venue are all in on it too, and have the same elated looks on their faces, then why wouldn’t you think that these three guys would carry on forever? I don’t know much about the music industry – though in hindsight I’m seeing some uncomfortable parallels with the publishing world, so maybe I should have known – but when, last month, they announced they were calling it a day and embarking on their last tour, I was totally floored. It wasn’t just a naivety about the industry; it was also, on a personal level, a moment that made me question what the hell I was doing in my own career. 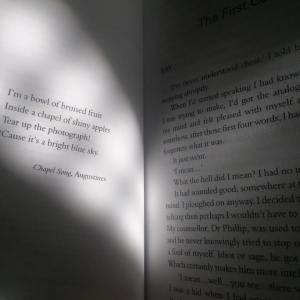 I wrote a bit in my latest novel, Cold Calling, about the band, mentioning the first tour I saw them on. I’d been thinking a lot about that time. That wonderful feeling you get when you find a band that you know you’re invested in completely. It was no surprise, I suppose, because their music soundtracked the writing of the book, their lyrics even appeared at the start. Yeah, Augustines had been on my mind a lot.

Augustines started around the time of my first novel, and as such I have always associated them with that part of my career. They have just always been there, making everything okay. Indeed it was through that first book that I got to meet Todd Howe – probably the band’s biggest champion – and then subsequently, through Todd’s recommendation, I found Bill, Eric and Rob. I saw them first in London, supporting The Boxer Rebellion, in, I think, March 2011. So in awe of what we saw then, my brother and I accosted Billy in the bar after and just hugged him. He didn’t seem to mind, or at least was polite enough not to say. It was just an instinctive thing. Had to do it. (It should also be noted that Augustines are probably the most huggable band around too.) From that gig on we were in. Totally signed up to planet Augustines.

When I interviewed Billy just after that first gig, he sent me a short tweet and told me he wouldn’t quit if I didn’t. A little thing, and I’m sure he has said the same to many other people struggling to follow their dream – follow your heart, live your life, do your thing your own beautiful way, that has been a message Augustines have sung from the start. But that short tweet was a big thing for me. When you consider the almighty shit that they have had to put up with, the heartache, and the knock-backs that dogged their early years, and the strength they have needed to keep going, that they were doing their own beautiful thing, and not just that, they were doing it with great big smiles on their faces and one huge joyous heart, then it really put my own pathetic little setbacks into perspective. It inspired me no end. It was never just the music, it wasn’t just the poetic, soul grabbing lyrics, it was also those three men on stage. Possibly the nicest band you could meet. A band that truly gave themselves to everything they did. No half measures, they left it all out there on the stage or in the recording studio. Some bands seem to copy and paste what they do, drift along with not much to say, but saying it anyway. There is an artifice to a lot of people. A fragility. People are scared to say anything, looking for a role to fit – rinse, recycle and repeat, never getting out of second gear. Never Augustines. They landed in fifth gear, fully formed, and never settled for anything less. That level of commitment does gain a lot of love, and I hope, I think, their fans have given it back to them too. Family is a big thing in the Augustines world, and that is how it feels following them, and meeting other fans – it feels like we are all a part of the Augustines family. Sometimes you don’t get to see family as much as you’d like, but they’re still there. They will always be there.

It’s always a struggle to create art, and live. People will always appreciate artists, maybe be envious of them, or aspire to be like them, and maybe it’s the struggle that sorts out the committed from the dreamers, maybe it needs to be there. It’s never been easy to create things – music, poetry, books, films – but I think that we live in a world now where the value of such things has been skewed. People equate creating art to fame. It’s easy to be famous; maybe that’s what has devalued the currency of art. Or maybe it’s the currency itself. It’s a hard thing to constantly keep pushing that piano up the hill when all you want to do is be allowed to sit and play it. It’s hard to do that when you’re twenty, let alone when you’re forty. Particularly if, like me, you can’t actually play the piano.

I took some time after Cold Calling, to think about whether I wanted to keep doing it. Was the shit, the disappointment, that continued pushing of the piano, really worth it? Truth is, it probably isn’t, but it’s also true that sometimes you don’t have much choice in the matter. You do these things because you have to, you don’t stop because someone tells you you should, or people litter obstacles in your way. You take a slip road, you go under or over or around, it doesn’t matter, the destination is still the same. I’m sure that is what Bill, Eric and Rob will do. It is the end of a chapter, not the story.

I’m very lucky to be an associate producer on Todd’s forthcoming documentary about them – Rise, and believe me, it is going to be a wondrous experience, and a beautiful celebration. So I get to play a tiny little part in their legacy and that makes me very proud.

I’m incredibly honored also that Billy let me use some Chapel Song lyrics in Cold Calling. I will never tire of seeing them there, nor of people telling me that either the lyrics or the brief bit in the novel about them, has made them go and check them out. Following the band from pub, to club, to the Roundhouse has also given me a lot of wonderful memories. You can’t really miss something that will always be there, and there are three records, three masterpieces, that will always be cherished. It helps to make you realise that it is more important to be happy you found them, than to be upset that they have gone. That’s a pretty good way to look at most things in life.

That I was in that period of indecision and doubt about my writing when Augustines made their announcement, I found it really hit home. I continue to question what I’m doing, or rather why I’m doing it, but I suspect I always will.

Being at Augustines final London show earlier this month was joyous, it was uplifting, it was heartfelt; everything an Augustines show always was. And then, towards the end, as Ballard of a Patient Man ended, and before Are We Alive began, Billy took to the mic and said ‘‘If I’ve learned one thing, it’s that you’ve got to live out loud and do what you gotta do, ain’t no one keeping score, this is your life’