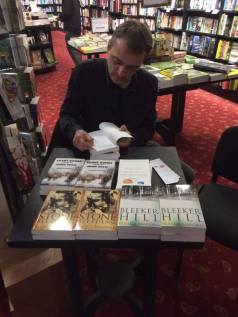 Russell is a novelist, playwright, and producer based in the South West of England.

He is the author of the novels, Stone Bleeding, Bleeker Hill, Darkshines Seven and Cold Calling, and the short story collection, Silent Bombs Falling on Green Grass.

Russell has also written for the British stage with the plays, Cool Blokes: Decent Suits, and its sequel, Suits 2: Back From the Cleaners performed at the Salisbury Playhouse, and The Seventeenth Valentine and Freestate playing at The White Bear Theatre in London.

Having studied film production in London he has also worked on various short films and is an associate producer on the award-winning documentary, Rise: The Story of Augustines.

Russell is also one of the founders of The Salisbury Literary Festival (www.salisburyliterayfestival.co.uk)